Dan Fox is a real ad guy.  And a real beer guy. 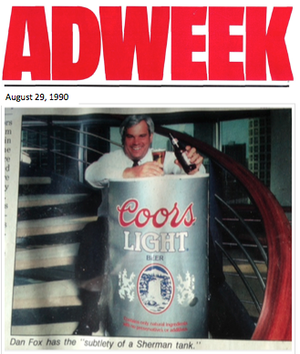 The "Sherman tank" remark came from a co-worker who may or may not have been a fan.
Dan accepted the Coors account assignment in 1988 at a time when agency management feared they were about to lose their only two pieces of business from the brewery. Not that many years later, FCB had been assigned every brand Coors had.

​Over the years, the ad-agency world has changed in many ways. Some good, others not. Dan figured his role always remained building clients' businesses with ideas. Of course, the agency promised pretty much the same thing in its new-client solicitations, but Dan took it as a personal challenge, encouraging his fellow account folk to do likewise. Indeed, he'd tell them, if they weren't personally generating ideas that would result directly in their client's business growth, they really were just "bag-carriers." Ideas mattered.

Dan coined "Frost-Brewed" for Coors Light, pioneered the larger opening on all Coors aluminum cans (subsequently adopted industry-wide... How could getting more beer out faster be a bad idea?), and wrote every Pete Coors "Somewhere near Golden, Colorado" script for a decade. He also told Hampton Inns management to put a fresh daisy in every room, every night as a reminder of the chain's legendary cleanliness. They didn't buy the idea, a setback Dan used to illustrate to his young account people the need to embrace failure as but a waypoint to the next success. Good ideas won't necessarily prevail.

After he retired in 2004, Dan signed on for five years as a staff consultant at a Chicago new-product development firm. Delivering any number of business-generating ideas for her many packaged-goods clients, its founder ran a truly creative enterprise. She had also been one of Dan's account people many years earlier.

Dan now writes this blog from an undisclosed midwestern location under the watchful stare of two vicious Labrador retrievers.
Got a half-hour to spare?

"We talk beer on Tuesdays."
Listen to "HeyBeerDan"
interviewed by his young friends at Brewsday Tuesday from their global podcasting headquarters
in Madison, Wisconsin.

Click here.
(Interview begins at 03:40 mark.)
A few miscellaneous notes and disclaimers about this blog

The focus here is on marketing ideas and their effects--or the lack thereof--on beer-brand health. Exhaustive share analyses, financial performance data, distribution metrics, economic modeling and the like will be left to others.

If you see what looks like a logo here, I do not own it. Just assume Anheuser-Busch does.

From time to time, I will edit and re-edit my posts, normally, to correct errors of form. If I need to make a change to content, the article will be flagged as updated.

The "comments are closed" notice accompanies the articles because I have neither the time nor inclination to read and react to online hostility, invective, and the utter nonsense which is common fare in comment sections. That's what Reddit is for. If you want to reach me, just use the contact form and I'll respond by email.

I won't spend too much energy defending the flavor profiles ("the liquid," as we used to say) of the big-beer brands. So I really would appreciate it if craft beer aficionados (among whom, I count myself) refrain from spewing their taste-venom here. There are plenty of other places around the internet where that sort of thing is encouraged.

I learned a great deal over my career from some marketing giants. They know who they are, but I may reference them from time to time. I will do so without their permission or endorsement.

Thanks for investing some of your time here. 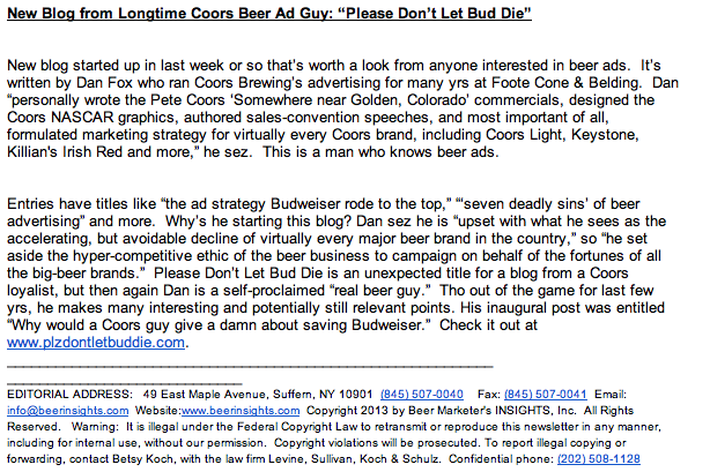 Why would a Coors guy give a damn about saving Budweiser?

Leading my merry band of ad-agency beer guys working to gain share and volume for Coors, I spent the better part of fifteen years--and the very best part of my career--also aiming to wreak whatever collateral damage I could on Budweiser. (Even with the statute of limitations comfortably past, some of our competitive antics remain forever the stuff of legend and lore.) Volume is not a zero-sum game, but share is.  It had to come from somewhere, and there was a special satisfaction in seeing it sourced in the King of Beers. "Heavy is the head...." but I digress. 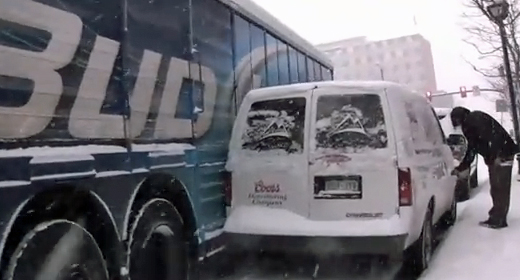 Sharp-elobowed competition was common to the beer business back in the day.
In those days--the late 80s into the new century-- marketing beer was about as good a gig as there was to be found for an ad guy. Large budgets, many smart, creative people on both the agency and client sides, and a "Beer Wars" zeitgeist that made marketing decisions seem larger than life. Indeed, lots of momentous marketing calls back then were made by men who trusted their gut, men who actually were "larger than life." Brands certainly experienced their ups and downs, but Budweiser reigned supreme, no matter how much its self-proclaimed royalty annoyed us. But staying with that metaphor, the crown princes of the time included Miller Lite, Bud Light, Coors Light and Miller Genuine Draft. Together with Budweiser, all these premium-priced beers were investing tens of millions annually in growing their business. And every one was succeeding.

In the marketing equivalent of a beaching of whales, all of those mega-brands--collectively, "big beer"--now find themselves losing volume, gasping for the life-breath of decent-margin revenue from a marketplace environment that seems to have changed without their knowing exactly when, how or why it happened, let alone what to do about it.

So, what prompts me to wade into this whole blog-Twitter-yak-o-sphere now? It's simple: My advertising experience and my life experience both tell me that the big domestic beer brands are oddly important to who we are as Americans in general, and American men in particular. (More about women, down the line.) Or at least they were. Seeing these big-beer brands gasping for air is actually painful to me. As a student of the beer business for over a quarter century, I find myself surveying their whale-beaching with a good many questions, a bunch of observations born of my experience, some nascent ideas, and as time goes by, maybe a big-mammal-floating insight or two. We'll see. I know this for sure: If Budweiser dies, some part of each of us will die with it. Hence: "PlzDontLetBudDie.com."

In any case, welcome. Feel free to stop back from time to time. To engage in the subject matter. Or just to hang out. And grab a cold one.