Can traditional masculinity still sell beer?
12/08/2013 Post
To judge by most of Big Beer's advertising these days, you'd think not. Any vestige of a traditional masculine ethos has been pretty much expunged from their commercials. It didn't happen by accident.

Purveyors of conventional beer wisdom—no doubt including a good number of the ad agency planner types who steer advertising ideas in one direction or another—have proclaimed that the “macho” remnants of another time no longer resonate with today’s generation of young men. "There’s a new masculinity we need to appreciate and reflect," they profess with a confidence beyond their years.

"Today’s target drinkers are young men who all grew up being reminded to wear their bicycle helmets and play nice," is the culture-sniffers' "insight." Reflecting this, current beer commercials are pretty much left with guys watching television, attending sporting events as fans, partying (but not too hearty) and the like. It’s all very… safe.

Beer advertising has moved on… to a couch.

A cynic might say we’ve left badass behind for bland.

Gone are once-common masculine themes like loyalty, honor, power, and achievement. Beer commercials that used to feature traditionally masculine mini-dramas of epic athletic achievement, extreme personal power, men expressing themselves in “a few words,” displays of hyper-confidence, men receiving the open adulation of lesser men, are all no longer in vogue. Forget about men being idolized by women. All this has become culturally toxic, at least in today's beer ads... with one notable exception that somehow manages to do every last bit of it.

As if to save the beer world from going completely soft, here comes the universally acclaimed Dos Equis “Most Interesting Man in the World” campaign, now in its seventh year of driving double-digit brand business growth. Its protagonist is the hands-down most masculine figure in all of beer advertising, arguably in all of advertising period. And aspirational? In a case of reality mimicing the advertising's voice-over copy, the real Michael Jordan actually asked to have his photograph taken alongside the most-interesting-man actor. 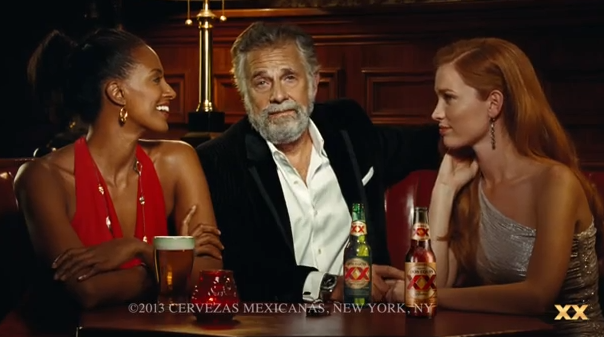 Every outlandish statement in this advertising is over-the-top masculinity.

"He wouldn't be afraid to show his feminine side, if he had one." | "His blood smells like cologne." | "He's a lover not a fighter. But he's also a fighter, so don't get any ideas."

The “most interesting man in the world” has been hailed in the advertising press for its break-through creativity, offbeat humor, and uniqueness in a sea of way-too-similar beer commercials.  What these well-deserved accolades miss, however, is its greatest strategic strength, the true brilliance of the campaign: Traditional masculinity captured and celebrated with delightful flair.

The charming protagonist does the impossible, lives life so large no ordinary guy could possibly do likewise, is worshipped by everyday people, revered by world leaders, and at the end of each commercial, finds himself in the company of some remarkably beautiful, and very much adoring women.

Yup. Thirty seconds of traditional masculinity in the extreme.

And young men can't seem to get enough of it.

(Note: A reader of this blog commented that, in addition to the traditional masculinity aspect of this Dos Equis campaign, it also represents Dos Equis taking advantage of an insight on liquor advertising noted here in an earlier blog entry:

Surprise! A good booze insight is... a good beer insight!)