Rahr's, Coors, the Packers and me
1/8/2014 post
Good stories have always been a joyful aspect of the beer business.
And if they include a lesson for every brewer in America,
so much the better. 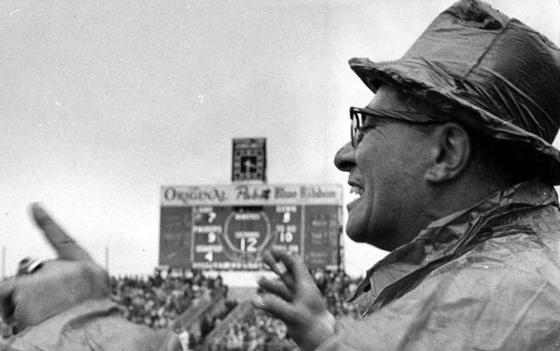 Coach Lombardi and the Lambeau Field scoreboard advertising one of the only two beer brands sold there in the mid-sixties. (Journal Sentinel photo)
As a college freshman, I arrived in Green Bay, Wisconsin in the mid-1960s, just in time for much of the epic run of Vince Lombardi’s Packers. Less newsworthy at the time was the gradual, but accelerating fall of that city’s sole beer maker, Rahr’s Brewing. Henry Rahr founded his brewery in 1866, ninety-three years before Lombardi's arrival. By 1965, everybody knew Lombardi, of course, but pretty much no one remembered who Henry Rahr was. Nor was there anyone with the family name left in brewery management.
Before I graduated from college, Rahr's was gone, the brewery shuttered and ultimately demolished. Just one more in the declining number of domestic beers. America may have been ready to embrace the Packers as the nation's team, but local beer back then meant old brands with odd flavor, and unreliable quality.

Some 20 years later, I would find myself assigned to head up the Coors account at Chicago ad agency, Foote, Cone & Belding. Anyone who recalls the challenges Coors faced back in the late-eighties will remember predictions that its fate would be not unlike Rahr’s. Too small/not enough scale/too regional/only one brewing site were among the frequent Coors criticisms voiced by business writers and Wall Street analysts.

But one thing the pundits never appreciated was the pivotal asset Coors had in the presence of the fourth generation of the family actively leading the business. Unlike the Rahr’s name on the bottles I sold at Lambeau, the name on the Coors label was also on the boss’ office door.
Ad agencies routinely overstate their importance to a client’s success, but one contribution we made lay in urging Pete Coors to become the TV spokesperson for the brewery. Not in some feel-good corporate advertising, but in commercials designed to communicate the real differences that made Coors beers special.
Which brings me to today’s craft beers, and what could well be their most valuable asset. It’s one they all share with the Coors of my time. And it’s the same one Rahr’s quietly forfeited so long ago.

That asset? Virtually every craft brewery benefits from the hand of the owner in all the key decisions. Ingredient selection. Recipe choices. Label design. Promotional events. Even how the trucks are painted. This means craft beer drinkers know for sure there’s a flesh-and-blood person responsible for their beer, not some soulless corporation. But is this really their most valuable asset?